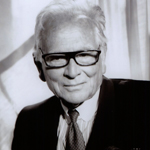 Pierre Cardin, a Frenchman, studied architecture but worked as a cutter for a tailor.  In 1939 he became an apprentice to a tailor in Vichy.  After WWII he worked as an assistant, first at Paquin and then at Schiparelli before becoming the head of the workrooms at Christian Dior in 1946. He was at Dior in 1947 and helped to develop the "New Look" which made Dior's fame.  Cardin went out on his own in 1950, starting his own couture house.

There are no products listed under this category.