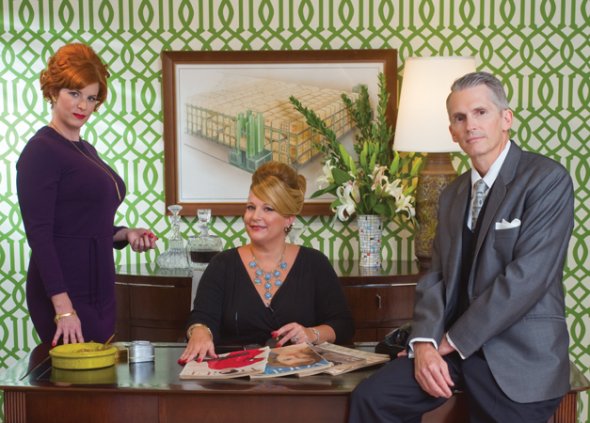 Lisa Marie Smith eagerly watches the hit show Mad Men, but not just because she’s interested in the drama played out inside a fictitious 1960s Madison Avenue advertising firm.

She never knows exactly when a piece of her vintage clothing collection will appear on screen.

AMC’s Mad Men has won critical acclaim for its plot, which revolves around mysterious, dashing ad executive Don Draper, a man with a secret past. But it has also attracted a cult of followers who watch purely for its fashions and gorgeous aesthetic.

With its period sets, furniture and clothes, the show is crammed with authentic pieces of mid-20th-century design. The result isn’t musty or old, but something very hip. John Mincarelli, a professor at the Fashion Institute of Technology in New York and costume historian, explains part of the appeal: In fashion terms, “We live in a time without structure, where no one knows where they belong. [Back then], the rules of fashion were very clear. Deportment mattered.”

The show’s look struck Smith like a bolt of lightning when she stumbled upon a Season 1 episode of Mad Men while channel surfing in the summer of 2007. “Visually, I fell in love,’’ she recalls. “It was the first time I felt this kind of propulsion.”

Smith knew exactly what costume designers needed to dress the cast, and she had the clothes to pull it off. A former radio advertising executive herself, Smith opened Orlando Vintage in 1995 and has acquired a peerless fashion and costume collection spanning 100 years. She’s secretive about where she finds her clothing, but credits a good eye and a passion for shopping.

The ‘60s are closest to her heart. Born in a Chicago suburb in 1965 and the youngest of six children, Smith grew up in a home filled with ephemera such as LPs and clothes from the Sears catalog. Looks back then, she says, “were so clean, balanced and functional—very European.”

Smith wanted this show. So she e-mailed Mad Men’s costume designer, Janie Bryant, with her research about clothing from the era, all the way down to the types of buttons and zipper pulls popular at that time. She also sent images of pieces in her collection that fit the bill. “I first approached it as being as sort of an unpaid historian,” Smith says.

Her strategy worked. Bryant called and since then has bought regularly from Smith, whose clothing has appeared on the show’s principal actors in seasons 2 and 3. Bryant says Smith understood what she was looking for and made her job easier.

“I look for vintage pieces that help convey the characters through costume,” says Bryant. And each item has to be flawless. Unlike many other period dramas, Mad Men mostly features clothing that is vintage, with few pieces that are sewn from scratch. “[Smith’s] clothing stood out because it was in such beautiful condition.”

In one of Season 2’s more poignant moments, ambitious ad executive Pete Campbell faces a moral conundrum when the ad agency decides to pitch a campaign to clean up American Airlines' image after a fatal crash, which happened to have his father on board. Devastated, but still determined to carry out his duties at work, grief wins out and he returns home where his posh wife, Trudy, looking very Jackie Kennedy in a blue Molly Parnis dress and matching jacket, consoles him over the tragedy.

It’s the kind of scene that keeps Mad Men fans wanting more, fashion fans on the edges of their seats and Smith glowing. “I get to be a part of something iconic,’’ she says. “Something great.”